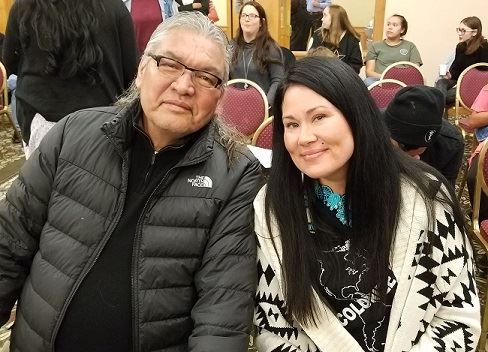 The world is undoubtedly a better place with Nicky Buck in it, and for her generous work advocating for others, the Human Rights Commission has named Buck the winner of the 2018 Amos Owen Award.

Since 2001, the Commission has presented the award to an individual who promotes justice and equality and stands up for the rights of others. The award is named after Amos Owen, the Mdewakanton elder, spiritual leader, and World War II veteran from the Prairie Island Indian Community who worked to preserve the Dakota language and culture. (Buck, a relative of Owen, grew up knowing him as “Grandpa Amos.”)

Throughout his life, Amos Owen spoke of peace and a desire for different cultures to work in harmony. To honor that, the Human Rights Commission annually requests nominations from the community to shine a light on individuals who work every day to uphold the values of Owen and his passionate belief in human rights for all.

Nominations are scored on three criteria, and Buck rose to the top. As Rayanna Lennes wrote in her nomination, Buck “has the ability to educate and share Dakota history today that translates in a way that breaks down barriers and evokes emotion. … Her willingness to stand before others to fight for the rights of the Dakota people … and build bridges between Prairie Island Indian Community and the people of Red Wing is clear.”

Recently, Buck came forward to speak about graffiti on He Mni Can [Heh-Meh-NEE-cha] – Barn Bluff on behalf of the Dakota. “For too long, the Dakota people have not been heard or respected on issues we feel are important and sacred to our people,” Buck says. “I was raised to defend people and things that cannot defend themselves. ... This bluff is a place where everyone should be able to come and find peace.”

Buck also focuses her work on food sovereignty and the rights of people to sufficient, healthy, culturally appropriate food—the right to a food system that honors the land and tradition. Buck’s work with the tribe’s cultural and medicinal garden and vegetable garden and her work with PIIC’s Culture Camp demonstrates her passion for educating others and upholding people’s rights to their traditions, food, and health. “The land has more healing power than any pill or substance,” she says. “We just need to help people make the connection."