During the nineteenth century, stone was used throughout the United States for:

This area, with its imposing bluffs, had large deposits of limestone. Taking advantage of this resource, the manufacturing of lime and the quarrying of building stone became the first large business enterprise in Red Wing.

Stone was burned in open kilns to extract the lime. This process started with calcium carbonate.  Early on, the limestone was placed in “pot-kilns.” The kiln operations required twenty cords of wood each day. The kilns had to be heated to a temperature of 2000 degrees and roasted at that temperature for several hours while the carbon dioxide was burned off. What was left was the lime, also called quick lime, commercial lime, or unslaked lime. A ton of limestone would yield one thousand pounds of lime. The lime was used in the production of mortar and plaster.

John Snow, a trader in this area in the early 1850s, built his trading post with a lime and stone foundation with the help of two Norwegians, Halvor Peterson and G. Burtness. Peterson and others manufactured lime from Barn Bluff stone for a business in St. Paul, but this endeavor did not last long.

Phineas Fish was the next to manufacture lime. His business was on a small scale and he stopped it when he became county sheriff.

History of Goodhue County (1878) noted that one hundred tons of stone was quarried each year for use in building cellar walls, sidewalks, and sewers, and for the burning of quicklime.  By 1880 businesses in Red Wing were producing five hundred barrels of lime each day, plus the building stone that was quarried. About thirty kilns produced lime throughout the forty years of the industry’s zenith.

As a boy, Enoch (Nickie) Johnson worked at his father’s quarry. He described the process for loosening the stone: "One man stood on each side of an iron pipe, taking turns at hitting it with a sledge hammer. After the pipe had been pounded down twenty feet or so, water was poured in to loosen the stone. Then blasting powder was poured in and a fuse was lit."

Decline of the Industry

The decline of the lime and stone industry was caused by increased difficulty in getting to the stone, the lack of closely-available wood for the kilns, and the rising use of Portland cement.

The End of Blasting

When the Chicago, Milwaukee and St. Paul Railroad built its double tracks, stone from the bluffs was used for rip-rap to protect the roadbed along Lake Pepin. Stone was quarried under contract for this purpose for a couple of years, but citizens, alarmed by injuries and a death on the job, the shaking of their homes when dynamite was set off, and the destruction of the bluff, called for a halt to quarrying at Barn Bluff. They were successful in ending blasting in 1908 and Barn Bluff became a city park. 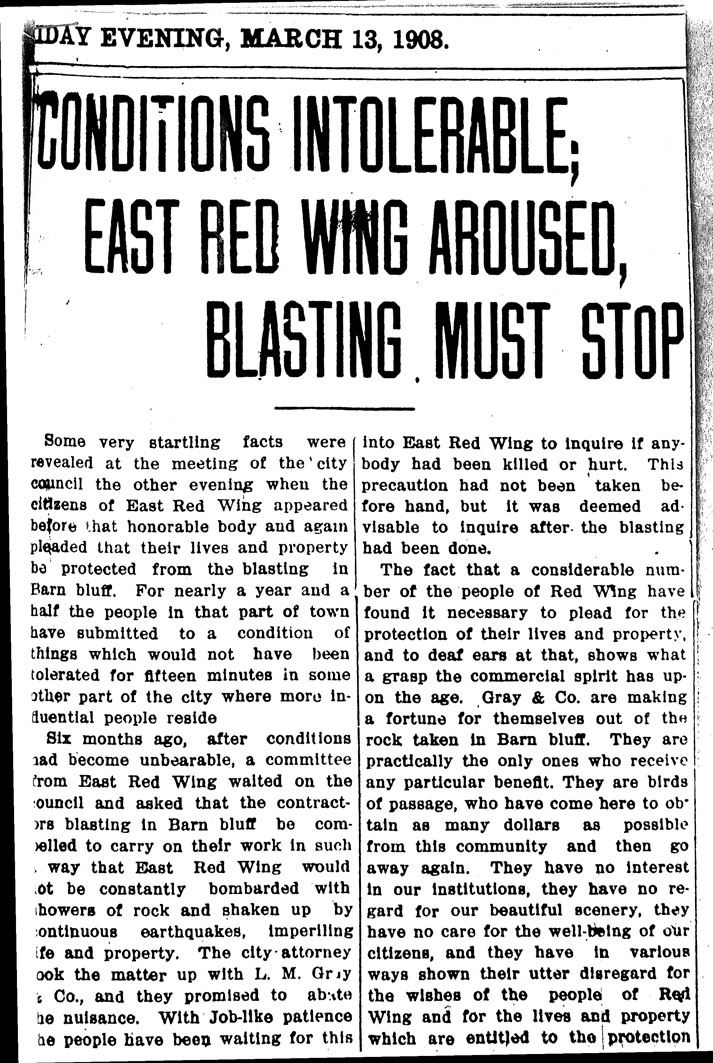