Officer John Peterson was mortally wounded in the line of duty by August Bloom in the Sibley Hotel (site of the Conoco Station at West 4th Street and Bush Street). Officer Peterson, along with Chief Daily responded to a complaint of a mentally deranged person at the hotel. Bloom fired one shot at Officer Peterson, striking him in the back. He died of his wounds the following day.

Officer Peterson was born on May 30th, 1856, in Orebro, Sweden. He immigrated to the United States in February 1881 and had lived in Red Wing ever since. On April 20th, 1882, he married Ann Johnson and they had five children: John Haldor, Arthur Edward, Ann Henrietta, Harold Valentine and Edna Florence. 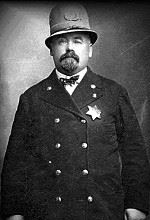 The City of Red Wing employed Officer Peterson for many years. In 1893, he was appointed to the police force and served continuously for 14 years as a patrolman.

During his last hours, he suffered a great deal of pain, but was conscious to the last. He felt that his end was near, although he hoped that life might be spared. He was brave and calm and at his bedside as he conversed with his sons and other members of the family. He was cheerful and bade them to be of good courage whatever the result might be. While he faced death cheerfully, he would have been glad of life, for he had much to live for. For those who knew the family and the relation of its different members, the one to the other, know that it was home where the bonds of mutual sympathy and love were particularly strong. It was one of those homes whose harmony made it earth’s choicest resting place, the very gate of Heaven.