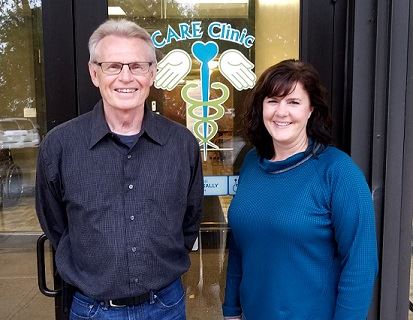 Taking CARE of the Community

Julie Malyon and LaVoie House believe that high-quality healthcare is a human right, not a privilege—and because of their dedication to living out that belief, thousands of people over the last decade have received that care with dignity and respect at Red Wing’s free CARE Clinic.

The City of Red Wing’s Human Rights Commission is honoring both people Monday night with its annual Amos Owen Human Rights Award at the 6 p.m. Red Wing City Council meeting and a special 5:30 p.m. reception immediately prior. The public is invited to attend. The award is named for Amos Owen, a Mdewakanton Dakota elder and spiritual leader from the Prairie Island Indian Community who worked to preserve Dakota language and culture and who shared the belief that all people, whatever their background, can live in balance and respect for one another.

Malyon, the CARE Clinic’s president, helped found the facility 10 years ago in a section of the former St. John’s Hospital. In the beginning, the clinic focused primarily on basic medical care. But through Malyon’s hard work and persistence, the clinic now offers medical care, dental care, mental health care, and legal and healthcare insurance assistance so patients get what they need all in one place. All services are available with an interpreter for Spanish-speaking clients, including a mental-health therapist to provide counseling.

Jane Lorentzen, who nominated Malyon, said, “I see Julie as one of the great social justice warriors in our midst. No problem is too big or small for her when patients need care and can’t afford it.”

“I work with and for some of the most amazing people,” Malyon says, noting that most clients who come to the clinic work one to two jobs and have families.

The CARE Clinic has had a big year. Under Malyon’s leadership, the facility moved into the former Seminary Plaza building atop College Hill, and it just started opening its doors Tuesday through Thursday to broaden dental opportunities for all, offering a much-needed preventative and restorative pilot program serving students, the disabled, and others in need.

But Malyon’s passion doesn’t stop in Red Wing; it’s led her across the globe to the Democratic Republic of the Congo, where she and her father work together periodically training doctors and nurses in rural areas, sharing health care practices that will lead to longer lives.

Still, Malyon is humble and doesn’t like talking about herself. She’s most excited talking about the work she does and about other people, especially the clinic’s patients, its 200 volunteers, and one extra-special volunteer: LaVoie House.

Malyon actually nominated House for the Amos Owen Award, so she was thrilled when House won—and then surprised to learn she would be sharing the honor with him.  House echos that surprise and admiration. “It is a huge honor for me to receive this award, and to be nominated by Julie is the greatest gift,” he says. “She is one of the very best people in existence.”

House, who taught math at the Minnesota State Correctional Facility in Red Wing for 29 years, has retired and since been one of Red Wing’s strongest advocates for the Latino community. He first learned Spanish out of curiosity through a series of Red Wing Community Education classes, then started connecting on a personal level with Latino families. Soon, he and Latino families began sharing meals and conversation together, and over the last 12 years he says he’s learned a lot from those relationships. In that time, House has been tutoring Spanish-speaking students through a Hispanic Outreach program after school, interpreting for Spanish-speaking patients at the CARE Clinic, and voluntarily running a program at Pier 55 Senior Center that brings English- and Spanish-speaking people together to learn each other’s languages.

In Malyon’s nomination of House, she said, “Throughout his life, LaVoie has identified those who have had their freedom and human rights taken away due to criminal detention, immigration/refugee status, and other injustices. He has formed relationships with the marginalized, advocated for them, and ultimately preserved their humanity in difficult situations.”

House has also brought his good works around the world, visiting Mexico and Costa Rica occasionally to teach English classes in the schools and bridge cultures through one-on-one experiences.

LaVoie and Malyon carry on the legacy of Amos Owen, standing up for human rights and building personal connections that lead to stronger individual and community health. “Connectedness matters for all of us,” Malyon says. House agrees. “The best thing is seeing life through the perspective of someone else. I never really did that years ago, and it’s given me a whole new way of looking at the world.”