On October 4, 2009, the ribbon was cut on Red Wing's first universal playground. As the ribbon was cut, children in wheelchairs swiftly entered the playground for the first time - free of barriers and eager to be the first to try out a new type of play equipment that hasn't been available in Red Wing until now. Mayor Donna Dummer, Physical Therapist Keith Kaiser, Jerry Borgan and Colvill Park Historian Jim Freeman spoke about the importance of having such a facility. 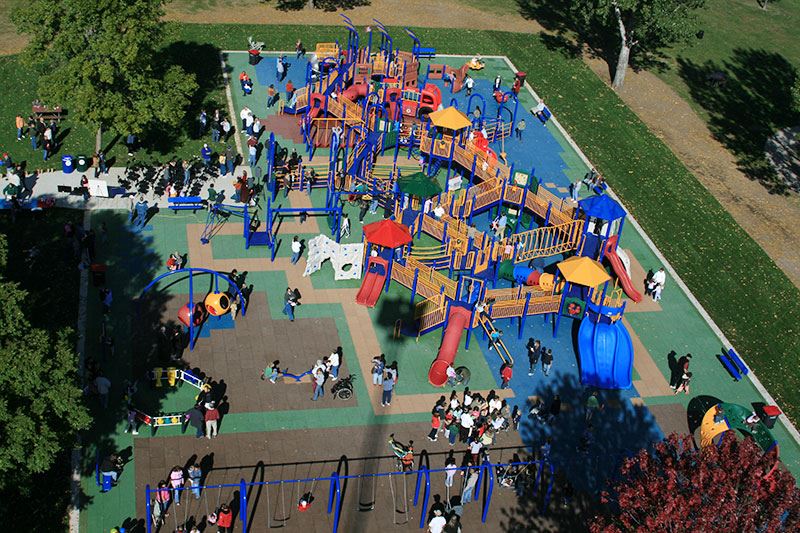 The vision for this playground was created when Red Wing residents Audra Quandt and Heather Marx where playing with their children at a Red Wing playground. Both children have cerebral palsy. The two mothers began discussing the possibilities of building a playground in Red Wing that would meet the needs of disabled children as well as adults.

After gaining support from the City Council, the Red Wing School District, other parents and local physical therapists, a Universal Playground Committee was formed. The two women, along with the committee, begin their mission to raise a half-million dollars to make this vision become a reality. A year and a half later, the playground is completed and being used.

According to former Deputy Director of Public Works, Public Services Division Lenny Strusz, "The efforts of many people are to be commended for making this playground happen. Audra, Heather and the committee worked tirelessly to fundraise and they were ‘hands-on' at every step of the project from equipment selection to installation. Many individuals and groups donated generously to provide the needed funding and thousands of in-kind hours to build the playground. Several contractors even commented about the outstanding community effort this project has been."

The Discovery Park is a wheelchair-accessible raised bed garden at Red Wing's Colvill Park, located next to the Universal Playground at Colvill Park.

Directions to the Park

The Universal Playground is located at Colvill Park, 510 Nymphara Lane.

The Universal Playground Steering Committee would like to thank all donors for the time, money and services contributed toward this project. Here is a list of Red Wing donors who donated $5,000 or more: