Two National Ski Jumping tournaments were held in Red Wing, Minnesota. Because Red Wing is recognized as the birthplace of ski jumping in the nation, and because Harris Andersen, Red Wing, was the President of NSA (National Ski Association) in 1927, Red Wing was awarded the 1928 tournament.

Red Wing’s population at the time was about 6,000 and it was reported that 25,000 visitors witnessed the two-day event on Charlson Hill. Harold Charlson, was the owner of a farmstead on Spring Creek Road, about 1 mile south of Highway 61 turnoff (near Red Wing Ford Garage). Harold owned the hill in back of his home and offered it to the Aurora Ski Club to erect a scaffold atop the natural hill, making it ideal for jumps of 120 to 180 feet. Harold was a member of the Aurora Ski Club and a ski jumper in his own right.

A clever and unique marketing promotion added to the crowd those February days. Harris wrote to Copenhagen Tobacco Company and asked for 2,500 empty boxes of snus (a popular Scandinavian chewing tobacco). He and Bill Ward, Red Wing, attached the boxes to 4-foot lathe poles with the help of a Red Wing Shoe Company salesmen.

They delivered the snus-box signs to snow banks, bulletin boards, and utility poles all over the upper midwest (Michigan, Wisconsin, Iowa, Minnesota, and North and South Dakota). The posters said “Follow the Snus Box Trail to the National Ski Jumping Tournament in Red Wing, Minnesota.” It worked as 25,000 attendees made Red Wing a gridlock. The St. James Hotel was headquarters for the jumpers and Red Wing Aurora organizers. Banquets were plentiful, but places to sleep were not. 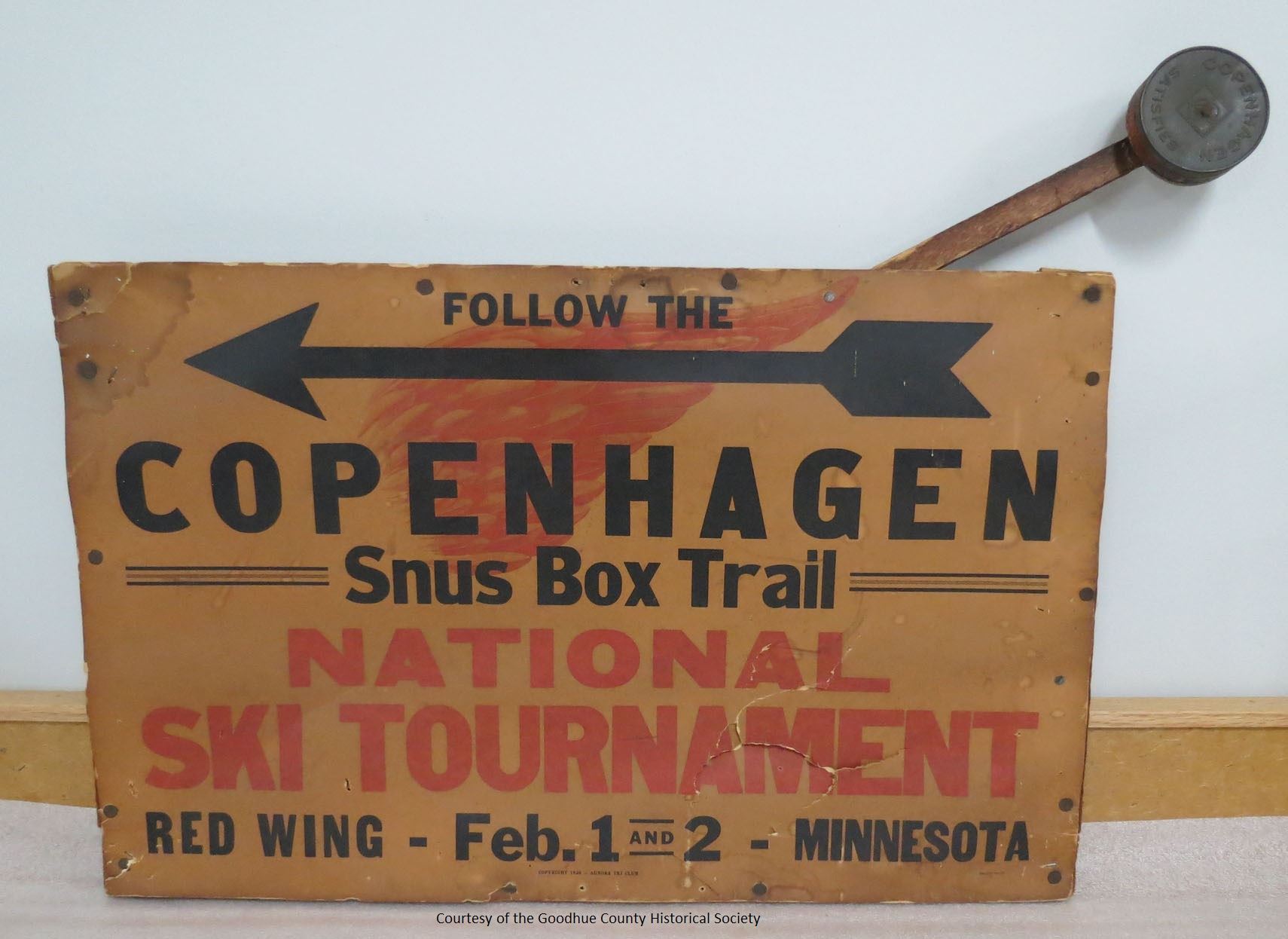 Other promotion events included cross country races, a Queen Aurora contest (awarded to the girl that sold the most tickets to the ski jumping tournament), and an actual ice castle in John Rich Park, across the highway from the YMCA. The castle was lighted with the giant Aurora Ski Club logo emblazoned over the front doorway.

The event was so successful that the NSA awarded Red Wing a second National Tournament in 1936. That is like having a Super Bowl of Ski Jumping two times in a little city like Red Wing.