Designed by Edward P. Bassford and built in 1874 to 1875 at a cost of $60,000, the St. James quickly became known as one of Minnesota’s most elaborate Mississippi River hotels. The hotel served both tourists and businessmen. Salesmen staying at the hotel used the library to show their wares to prospective buyers. Expectant mothers from the surrounding rural areas often came and stayed at the St. James as their times to give birth approached.

A group of Red Wing businessmen came together as investors to build the hotel. They saw that the city needed a hotel for the steamboat and railroad traffic. At this time, Red Wing was the state’s fifth largest city and had been the world’s largest primary wheat market in 1873.

E. J. and F. A. Blood (brothers) signed a five-year lease and became the proprietors who finished the interior decorations. The “Blood Brothers” or “Ed and Fred” (as the newspapers called them) received good reviews in The Minneapolis Mail about their décor.

The grand opening, called “Blood’s Blow-Out” was set for Thanksgiving 1875. Tickets to the event were $5 per person. 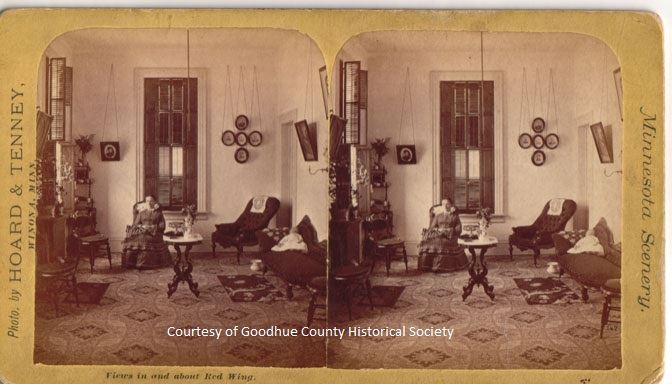 The eight-course meal started with a course offering four different kinds of oysters. The whole menu included more than sixty items. Almost five hundred people listened to speeches and dined, and danced through the celebration.

In 1877 the railroad adjusted its schedule so that its passengers could have meals at the St. James. The hotel served one hundred meals on a regular basis. The railroad also built a sidetrack platform to make it easier for the passengers to walk to the Bush Street hotel entrance.

The hotel had regular boarders as well as guests, serving thousands of people annually. The small balcony on the Main Street side of the hotel served as the dais for a speech from President Rutherford B. Hayes in 1878. (He stayed overnight in his train car, but did eat at the hotel.)

After the Blood brothers left the hotel, a temporary manager stepped in. However by 1890 the hotel needed improvements and was shut down for a short time while repairs and updates could be made.

Charles Lillyblad bought the hotel in 1905 and the Lillyblad family ran it until the Red Wing Shoe Co. took it over in 1977. The Lillyblads’ public baths, with marble and brass fixtures and hot and cold running water, were known by locals as “Charlie’s Million Dollar Can.” To come through tough economic times, the Lillyblads added space for a “private joint practice,” the beginning of a medical clinic in town. Dr. Kretschmar pioneered a mercury solution injection treatment for varicose veins. The clinic left the hotel in 1975.