The City of Red Wing's Fire Department is rich in history. Fortunately, there are a few individuals, who have researched and spent many hours gathering and studying the department's past. These next pages are dedicated to both firefighters of the past, present and future.

The Red Wing Fire Department has provided fire and EMS services to the citizens of Red Wing and the surrounding area for over 150 years.

The Protection Hook and Ladder Company Number 1, Red Wing's first fire company, was organized in 1857 with Jessie McCintire elected as the first Chief Engineer. Red Wing's City Council refused to recognize them as a legitimate company so they relied on subscriptions and donations to meet expenses.

Equipped with a wagon, a couple of ladders and a few buckets, the company was not called on to extinguish many fires. They were once used to demolish a home whose occupants had "an unsavory reputation."

The Protection Hook and Ladder Company listed its 1858 equipment inventory to include:

The Protection Hook and Ladder Company reorganized on December 6, 1858 as the Torrent Engine Company Number 1. They disbanded in 1865 because they were unable to obtain an engine. 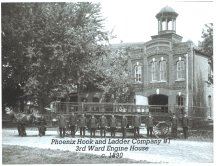 Throughout the 1860s, several companies were organized including Cataract Hose Company Number 1, The Niagara Engine Company Number 2, and the Champion Extinguisher Company. These Companies were formed in name only as they were unable to obtain the equipment needed to be considered legitimate fire companies.

In 1865, fire claimed the Teepetonka Hotel. The Fire Department felt that with modern firefighting equipment, the hotel may have been saved.

Department officers approached the City Council and asked that a tax be levied so the department could purchase an engine.

"If the property owners and principal taxpayers of this city don't like the proposition, they can vote no and perhaps the City Council, to meet their case, will vote for another two dozen pails!" Later that year, the City Council agreed to purchase two hand pumped engines and two hose carts (second hand) for $1050.

During the exhibit, the fire alarm sounded. The cart had to be dismantled and brought down to the street. Before the cart could be reassembled and drawn to the fire, the Metropolitan Hotel on Levee Street had burned to the ground.

The city's first firehouse was built downtown on West Third Street in 1860. Three additional stations were built throughout the city before the turn of the century. The first fire bell was purchased and installed in 1871 at a cost of $900.

By 1884, the city's waterworks was constructed including fire hydrants to replace the cisterns and wells in residential areas. Red Wing saw many costly fires in the 1870s and 1880s including the

The loss of the flour mills was considered the most damaging.

In accordance with a resolution adopted by the City Council on March 6, 1885, the Red Wing Fire Department reorganized.